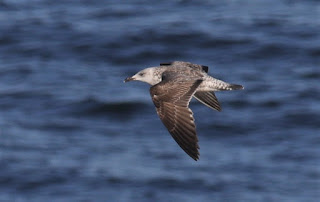 For the second year in May in a row, I've photographed a Lesser Black-backed Gull flying past my bluff.
The first cycle bird above was seen on Tuesday morning and as a bonus it brought a friend... 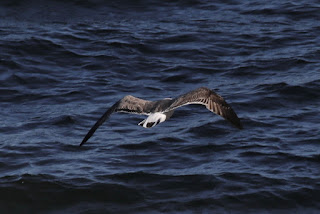 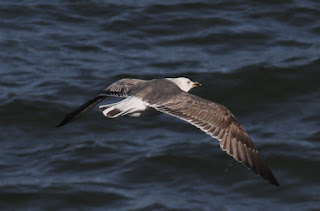 This gull species brings my yardlist for the year up to 155.
The other bird of interest from Tuesday was an adult Bald Eagle which flew by at close range at eye-level. 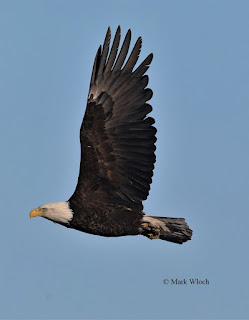 Posted by Mark Wloch at 2:34 PM No comments: 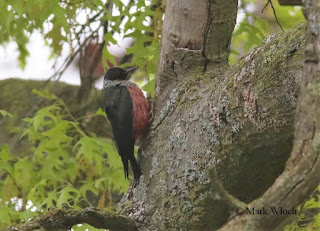 A Lewis's Woodpecker has been the talk of West Michigan birding the past few days.  It showed up in the yard of a birder in Fruitport Twp on Monday and word quickly spread to draw birders from across the state to see it.
Yesterday afternoon Brian Brosky and I headed down there and after about an hour we were able to locate the bird with the help of Salar Alam who had seen the bird a little while before we arrived. 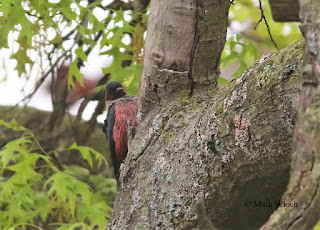 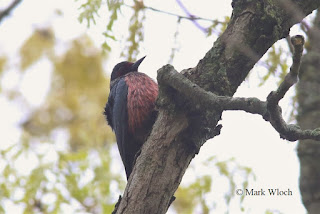 It is only the fourth record for this species in Michigan, but the first since 2004 and the first in the lower peninsula. 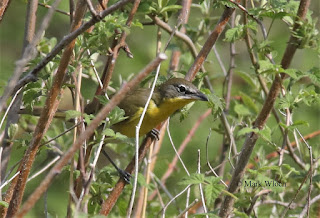 A Yellow-breasted Chat found its way into my yard this morning and set off a daylong game of hide and seek.  Brian Brosky and I first spied the bird at 10:41 am, and while the last sighting was over 8 hours later the total time that the bird was visible could have been less than a minute.  At one point it was not seen for four hours only to be relocated in the exact location it had been last seen.

This is only the second time a Yellow-breasted Chat has been seen in Mason County.  The previous sighting by Ethel Getgood occurred on May 18, 1974. Of course this represents a new species for the yard list, number 184.  It is also the 140th species that I've seen here this year and the 100th this month. 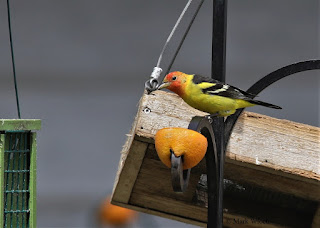 Around noon today Randy Dougherty noticed a Western Tanager on the feeders at his Hamlin Lake home. Word of the discover got to me through a text from Brian Brosky.  Travelling from different parts of the county Brian and I arrived at the same time at Randy's house. Though not initially present it showed up a few minutes later just as the Wilson brothers (Benjamin, Levi and Thaddeus) got on site. 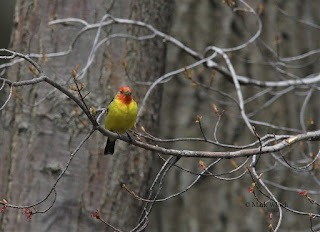 This is only the second recorded visit to Mason County for this species.
Posted by Mark Wloch at 7:49 PM 2 comments: 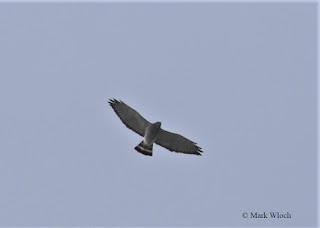 On Thursday and Friday more than 100 raptors were seen migrating over my property.  More than half were Turkey Vultures but 51 others represented 9 species.  The first Broad-wingeds of the year were seen.... 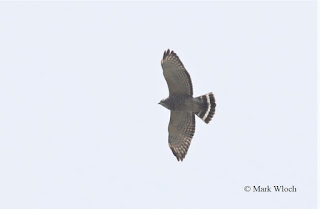 ...which included a dark morph seen below. 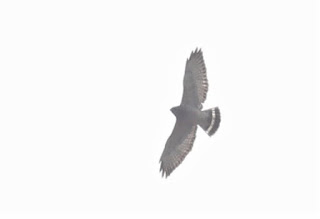 The usually speedy Peregrine Falcon slowed to do a few spins over the yard.

The Bald Eagles below were not migrating either but the lead bird appears to have found a place for one stop shopping as it is carrying tattered fish remains and nesting material. 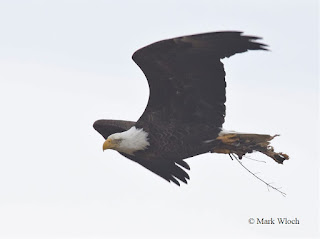 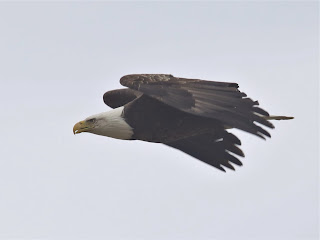 Stay tuned for updates on these eagles because they appear to be repeating the behavior that I saw from them last year where one would fly north empty-handed, then a short while later fly south with a fish in its grasp. I suspect that there is a nest a little to the south of me.
Posted by Mark Wloch at 6:12 AM No comments: 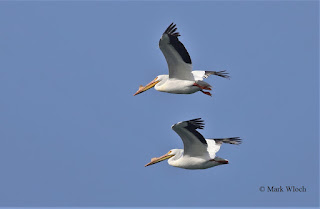 A busy bird day was expected Saturday with southerly winds aiding migration in the preceding overnight. While searching for new arrivals in the front yard I noticed two huge white birds over the lake about to disappear behind the neighbor's trees.  I took off in a sprint to the backyard waterfront and was able to get a few photos of a pair of American White Pelicans meandering southward. They are the 101st species that I've seen from home so far this year.  Last year I didn't hit 100 until May 2.

Other new arrivals for the year were

Also a couple of House Wrens were heard and seen but wouldn't pose for the camera. They brought my yard total for the year to 104.  As I was processing the images in the late afternoon I received a text from Brian Brosky about a Cattle Egret found by Brendan Klick in Grant Twp.  Needing that bird for my Mason County list I grabbed the camera and headed out to Townline Rd where the egret was of course, hanging out with cattle. 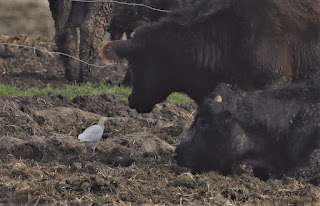 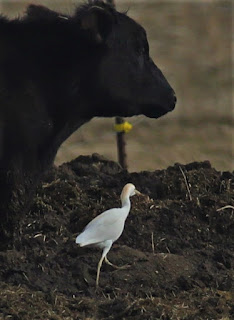 After locating and photographing the bird, I checked the Mason-Manistee-Oceana County Bird Chat on Discord and saw that Brendan Klick also found a Wilson's Phalarope just a mile south of the egret on Beyer Rd.  I was there within a couple minutes and was able to get some distant shots of the phalarope. 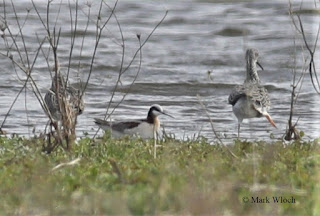 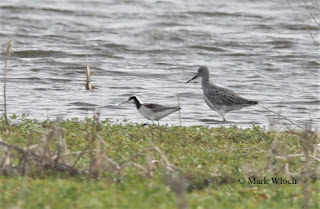 The phalarope is also a first for me in the county. My county list is at 252.
Posted by Mark Wloch at 7:08 AM No comments: 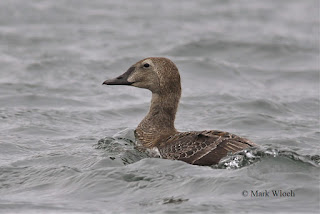 Mason County birding is on fire.  For the second time in a week a county first has been found.  Over the weekend Donna and John Haack found a Yellow-crowned Night Heron and yesterday Grand Rapids area birder Steve Minard found a King Eider just north of the north breakwall of Ludington Harbor.
Just before 1 pm I received a call from Brian Brosky relaying Steve Minard's discovery. As quickly as I could, I headed out to the north pier where Brian had already relocated the arctic duck.  The bird was somewhat cooperative as it provided an array of activity all within a relatively short distance of the pier. 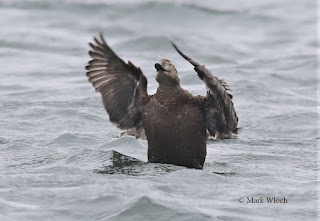 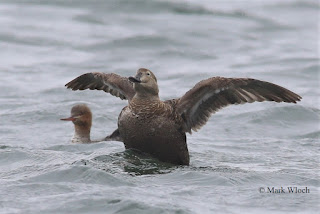 With the peak of the spring migration coming in the next few weeks let's hope the county's hot streak continues.
Posted by Mark Wloch at 7:30 AM No comments: